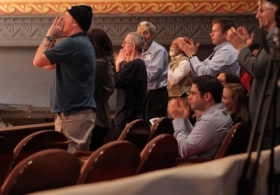 A new production at the Lyric Opera of Chicago that opens tonight uses an ancient tale to explore a modern problem. It fast-forwards Handel’s “Hercules” to America, today. Hercules becomes an American general who’s returning from Iraq and Afghanistan. The opera explores how difficult it can be for soldiers and their families to reconnect after war.
Onstage, a woman sat alone weeping. Her husband was off to war. She didn’t know where he was, if he was dead or alive.
Alice Coote as the wife, Dejanira, sang to an unusual crowd. More than 80 military veterans were here for the dress rehearsal. Some shared their stories with Director Peter Sellars. Sellars used those details, along with Sophocles’ play the opera’s based on, to make Hercules’ struggle to readjust feel very real.
“So many soldiers will say the only way you survive everyday out there in battle is to disconnect,” Sellars said. “What does it mean when you come home and you’re expected to connect immediately?”
Sellars said the unbearable intensity of Handel’s music matched the vets’ experience.
“Handel was the composer of the soundtrack to post traumatic stress,” he said.
Hercules returned home safely in battle garb, strapped with weapons. The audience watched as Hercules’ wife tried to comfort him, and he kept drawing away. She became increasingly confused and jealous. Hercules sang of being lost, his weapons hanging useless.
When people gathered to celebrate his homecoming, he and his wife stood alone in the middle of the crowd, visibly uncomfortable. Soon, they were fighting and drinking.
Veteran Bernard Jones said the opera stirred up memories. After his service, he felt alienated from family and friends.
“We just had no relation to each other for a while,” Jones said. “So I had experienced things that maybe they never would, and we couldn’t really, we had no form of communication for a while.”
Like too many vets, he became homeless.
“We’re in public, but sometimes we’re not in public mentally. Oftentimes, I am amongst people, but it is if as I’m floating off somewhere else.”
He said his daughter has it even worse. She’s served three tours of duty in Iraq. Often, she’ll call crying.
“She experienced so much trauma, and it’s drama, there’s a lot of drama. Watching this, I can almost see myself putting music to her life,” Jones said.
The opera resonated for veteran Robert Malnik in a different way. He got teary over the conflict between spouses.
“I was actually married,” Malnick said. “I went through a terrible divorce because I didn’t have the help I needed, and I was married to the most beautiful woman I ever met.”
Malnik said he didn’t sleep for about six months when he got back from Iraq.
“I would close my eyes, but I would still be in tune with the reality of what’s going on, because when you’re in combat, you have to be aware of situational awareness at all times, because otherwise you die or your friend dies. That’s kind of what I was experiencing,” he said.
Malnick said he needed counseling and services to figure out what to do for money, a job, school.
Malnik eventually got the support he needed. Now he helps other vets by working at A Safe Haven Foundation, the agency that brought vets to the show.
“I just want the audience to realize that there’s still a war going on out there, and lot of these veterans are still coming home and they need help and guidance and support from everybody within the community,” he said.
That message became even clearer, as the opera culminated in tragedy. Hercules died, and Dejanira fought madness.
But in the end, there was a powerful gesture of mercy and forgiveness. And many of the vets in the audience jumped to their feet and applauded.