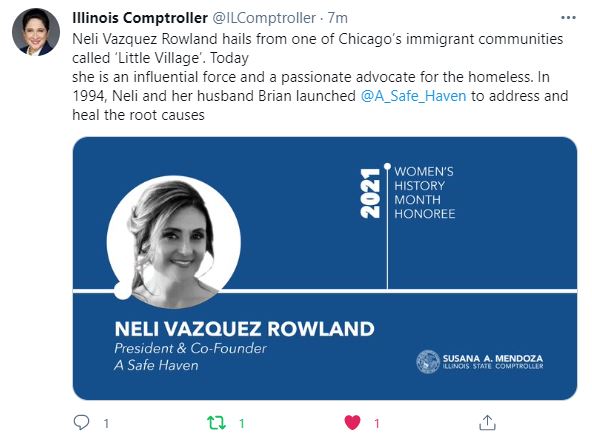 “Neli Vazquez Rowland hails from one of Chicago’s immigrant communities called Little Village,” Mendoza said through Twitter. “Today, she is an influential force and a passionate advocate for the homeless. Neli and her husband Brian Rowland launched A Safe Haven to address and heal the root causes of the growing opioid and homeless epidemics.”

Throughout March, Mendoza’s office is celebrating Women’s History Month by remembering trailblazers of the past and praising female visionaries for their ongoing efforts and commitments to positive change.

“On behalf of ASH, we are truly humbled and honored by this recognition,” said Rowland. “With Brian, ASH has become a trusted anchor organization serving and meeting the needs of almost 5,000 of Chicago’s homeless including adults, youth, families with children and military veterans, annually. Our nonprofit has also been recognized as a pioneering architect of one of the most comprehensive and vertically integrated models in the world.

Mendoza additionally praised ASH in having helped “130,000 people transform their lives to short and long-term independence and self-sufficiency. Neli’s authentic, courageous, and visionary approach to confronting and solving one of America’s most challenging issues has made her a highly sought-after speaker by top media, academia, local, national, and international public policy stages.”

With the pandemic and financial challenges that threaten people every day, Rowland continues her work.

“Homelessness is an issue that isn’t going away any time soon,” she said. “It takes much work, collaborative help from public and private partnerships and education to end homelessness,” Rowland said. “I will always use my voice to reach that goal.”