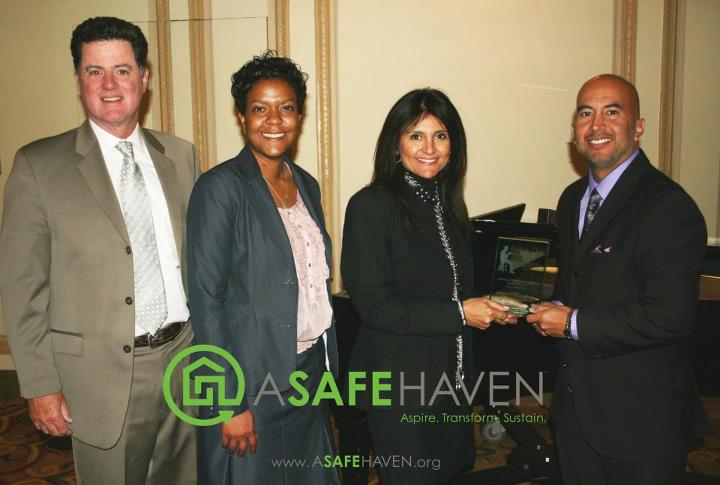 CHICAGO – Today, A Safe Haven received the Silver Trumpet in Issues Management from the Publicity Club of Chicago for its awareness and outreach campaign, “Helping Homeless Veterans Return Home.”

The ceremony was held at the famous Palmer House Hilton Hotel, and was emceed by Valerie Warner and Ryan Chiaverini, co-hosts of ABC 7 Chicago’s popular morning talk and entertainment show, “Windy City LIVE.”

A Safe Haven began this campaign in order to create awareness around issues facing homeless veterans, and as an outreach initiative. By the end of the campaign, A Safe Haven increased the number of veterans served in one year to over 500 in 2011.

“We are honored to receive this award from the Publicity Club of Chicago,” said Neli Vazquez-Rowland, co-founder of A Safe Haven. “We are proud of the work we do in helping homeless veterans and others become self-sufficient, and we are looking forward to building on our past success.”

The veteran community appreciated the award, as well.

“The leadership and staff of Jesse Brown VA would like to congratulate A Safe Haven on their award for their work with veterans,” said Michael Molina, Public Affairs Officer of the Jesse Brown VA Medical Center. “The partnership we have built is paramount in eliminating homelessness amongst veterans and ensuring our nation’s heroes are treated with the care and dignity they have earned.”

Chicago Congressman Danny K. Davis commented how glad he was that A Safe Haven was working on this in his district.

A Safe Haven now has 16 sites throughout Cook County.

An astounding 30% of homeless adults in the United States are military veterans. Since September 11, 2001, A Safe Haven has been increasing the services it provides to homeless veterans. Two more dedicated sites are on their way, in addition to exclusive job training programs.

About A Safe Haven
A Safe Haven empowers families and individuals experiencing homelessness or crisis to achieve sustainable self-sufficiency. After a crisis struck their own family, Neli Vazquez-Rowland and Brian Rowland left their jobs in finance to found A Safe Haven in 1994. Frustrated by fragmented services, Neli and Brian integrated supportive housing, case management, addiction treatment, education, and life skills, with a network of affordable housing, industry training, and job placement (including landscaping, food service, security, housekeeping, and customer service) at A Safe Haven. Now people in crisis, particularly the homeless, have a comprehensive, integrated path to self-sufficiency and independence. After finishing a program customized to each resident’s needs, A Safe Haven graduates thrive as they contribute to society. Graduates earned $3.2 million and paid nearly $500,000 in taxes in 2010, due to some of the United States’ highest job placement and retention rates, measured by the Department of Labor. At a time when economic and political realities demand a new approach, A Safe Haven helps people help themselves, partnering public and private interests to deliver a sustainable, evidence-based social business enterprise model that makes a direct and lasting impact. A Safe Haven has been lauded by leaders in academia, policy, and business, and other stakeholders for developing the model to solve homelessness and crisis.A Safe Haven relies on public and private support at every level.Learn more and watch a video of veterans at A Safe Haven at www.ASafeHaven.org or www.Facebook.com/ASafeHavenFoundation.