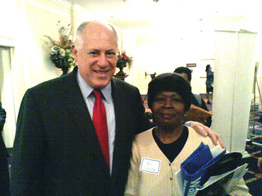 Veterans living at the A Safe Haven Veteran Suites, A Safe Haven’s new housing dedicated to veterans, attended the fair after participating in A Safe Haven’s pre-employment training and classes.

U.S. Navy Veteran Mellody Frazier has lived at A Safe Haven Veteran Suites since December, and found the Hiring Our Heroes event valuable for her.

Frazier, who served as a nurse in a Navy hospital, said she is also considering enrolling in A Safe Haven’s Landscaping Professional Institute, but liked her options at the job fair.

“I spoke to representatives from 6 different businesses, mostly in healthcare and federal government, to see what they have to offer,” said Frazier. “They accepted resumes, and I am following up with them to pursue these job opportunities.”

Brian Rowland, the co-founder of A Safe Haven, is himself a veteran of the U.S. Army. He said A Safe Haven housed over 500 veterans in 2011, and that Wednesday’s attendance at Hiring Our Heroes is part of a larger initiative at A Safe Haven to end homelessness for hundreds of veterans each year.

“Most Americans are one paycheck away from being in crisis. Veterans come back and fall into that even quicker,” said Rowland. “We are grateful for the partnership with Hiring Our Heroes as part of our initiatives to provide bright futures for veterans experiencing homelessness.”

U.S. Senator Jack Reed (D-RI) said on Wednesday that helping homeless veterans is a priority right now, when the government is seeking to provide more housing by integrating with different organizations.

“Our goal should be to end veterans homelessness in the United States,” said Reed. “It’s shocking that these young men and women who have served their country so well, now literally can’t find a place to stay.”

Chicago-area Congressman Danny K. Davis commented how glad he was that A Safe Haven was working on this in his district.

“We’re very proud of A Safe Haven, one of the Chamber’s members,” said Mark Williams, Executive Director of the Chicago Chamber of Commerce’s DisabilityWorks. “We give special recognition and special applause today to A Safe Haven for … contributing to one of the pieces that make a productive life—housing, employment, education—these are all important for all veterans.”