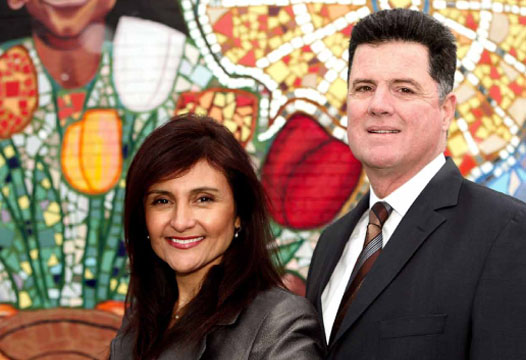 A Safe Haven: Alumni leave finance to help those in addiction recovery

In the early-1990s, Neli Vazquez-Rowland (BA ’85) and her husband, Brian Rowland (BBA ’89), were flourishing in the financial field. She was a successful financial advisor, managing portfolios for the wealthy. He did index arbitrage at the Chicago Board of Trade, profiting from market inefficiencies.

Then the bottom fell out. Brian was addicted to alcohol. As he got sober and discovered the paucity of services for those in recovery, the couple began investing in real estate, buying abandoned Chicago apartment buildings during that era’s economic downturn. They rehabbed a 13-unit building in Logan Square, and rented it for a year to people recovering from drug and alcohol addiction. When the market recovered, they figured they’d sell it, and reap their profit.

But that day never came. The Logan Square project was so successful that the Rowlands established A Safe Haven Foundation in 1994 and developed a comprehensive program to serve those in recovery.

“It was a leap of faith to leave our established financial business, which was providing a very comfortable lifestyle for our family,” recalls Neli. “It wasn’t an easy decision. But treatment centers and hospitals were referring people to us in droves. We saw there was a glaring hole to fill: a safe place where people could work on their recovery.”

For the first five years, the foundation received no public funds, and Neli continued work in the investment business to subsidize care for thousands. Their project eventually became the state’s first licensed recovery home.

“Once we knew that people were getting better under our model, it would have been heartless not to do it,” Neli says.

A Safe Haven now has 130 employees, an annual budget of $16 million, and 500 apartments in 16 sites for permanent housing. In addition, there are 1,375 beds for temporary housing in a program that includes supportive housing, meals, case management, drug and alcohol treatment, health care, job training and placement, and access to affordable housing.

The housing serves homeless singles as well as single parents and their children, as A Safe Haven works to reunite families torn apart by addiction. In January, Neli was named “Chicagoan of the Year” by Chicago magazine.

“It’s the most rewarding work in the world,” says Neli. She and Brian live in the western Chicago suburbs with their sons, Dylan, 16, and Devin, 20. “There’s tremendous satisfaction in helping people finally break the cycle of homelessness, joblessness, incarceration, and addiction.”

A Safe Haven helps clients with a program based on six guiding principles. The foundation emphasizes resilience as a key to self-sufficiency, recognizes multiple long-term pathways to recovery, and empowers individuals and families to continue their healing once they become independent. It bases its practices on scientific studies of what is working for its clients.

A Safe Haven has served more than 32,000 clients and provides services daily to 1,200. Neli says 70 percent of the program’s clients have remained sober for three years—more than five times the national average. With state funding cut by 50 percent over the past two years, A Safe Haven has secured federal support from the U.S. Veterans Administration, Department of Labor, and Department of Justice. Corporations, such as Wal-Mart, have also contributed.

“With our background as investment bankers, we know how to measure what we do,” Neli says. The government can lock people up for $100 a day or put kids in foster care at $30,000 a year. Our average cost is $80 a day. For me, it’s a no-brainer: the money should follow the data that gives you the biggest return on your investment.”

The foundation also works with military veterans back from the war in the Middle East—Brian Rowland is himself an Army veteran. The foundation also reaches out to men and women discharged from local jails and
prisons. In February 2009, A Safe Haven and Loyola’s Center for the Advancement of Research, Training, and Education co-sponsored workshops for 300 Illinois parole officers, who came to campus to learn about services for parolees with substance-abuse issues and housing problems.

Arthur Lurigio, PhD, professor of psychology and associate dean for faculty, evaluated the workshop. He says housing and addiction services are key elements for successful reintegration for recently released inmates, who can be unfairly stigmatized by many in society. The stakes are enormous: 3 percent of the U.S. adult population was either incarcerated or on probation at the end of 2006, says Lurigio. More than 600,000 are released annually, including an estimated 17,000 a year in Cook County.

“At A Safe Haven, that stigmatization is utterly removed; the men and women feel appreciated,” Lurigio says. “They find a place where they can set a trajectory for a new life.”

“It’s not the first time Neli and Brian have collaborated in the workplace. They met at Loyola in 1983 and were friends for several years before becoming a couple. They worked together at Oppenheimer, the brokerage firm, and later worked side-by-side at their own financial services company. Today, Neli is president of A Safe Haven Foundation. Brian is the CEO /manager of A Safe Haven LLC, which is under contract with the foundation to manage its operations.

“It takes more than a big heart and a desire to help,” says Brian. “It takes very resourceful people with business skills, the ability to pull in investors, and ways of developing empirical evidence to get foundation grants.”

Brian recalls that during his recovery, he had health insurance, a job, and a family that provided emotional support. Many of A Safe Haven’s clients lack some or all of those support systems. Private health insurance is less generous as well. In the 1980s, many private policies would pay for a 30-day stay at a rehabilitation center after a patient went through detoxification.

Today, most policies only cover short-term detox, according to Brian. Neli and Brian believe that A Safe Haven’s motto—Housing is Health Care—goes to the crux of the problem for people struggling with addictions and post-incarceration life. Housing provides the foundation for rebuilding a life. Without it, attempts to change can quickly disintegrate.

“The average addict goes through detox six times a year,” says Vazquez- Rowland. “For too many, there’s no after-care, and they end up back in the alley. Our country needs a paradigm shift. We need to capture people as they leave detox, and get them into a sustainable continuum of care, where they can learn to live in recovery.”

Finding work helps, too. A Safe Haven’s clients get assessed at the foundation’s Center for Workforce Development, then take courses in job readiness to qualify for job training in six areas: food service, landscaping, housekeeping, security services, telemarketing, and sales.

“Early on, we faced the challenge that no one would hire our graduates,” says Vazquez-Rowland. “Now we work with employers who want to provide a second chance. Our clients grow through this experience. They come to realize how important and precious life can be.

About 80 percent of those in the job training program secure job placements, and that can provide the financial foundation to support recovery, stability, and, eventually, independent living.