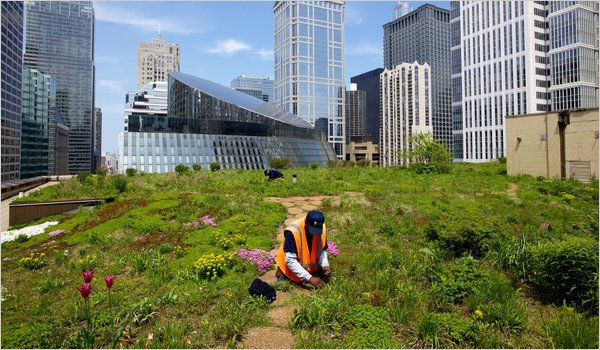 A City Prepares for a Warm Long-Term Forecast

CHICAGO — The Windy City is preparing for a heat wave — a permanent one.

Climate scientists have told city planners that based on current trends, Chicago will feel more like Baton Rouge than a Northern metropolis before the end of this century.

So, Chicago is getting ready for a wetter, steamier future. Public alleyways are being repaved with materials that are permeable to water. The white oak, the state tree of Illinois, has been banned from city planting lists, and swamp oaks and sweet gum trees from the South have been given new priority. Thermal radar is being used to map the city’s hottest spots, which are then targets for pavement removal and the addition of vegetation to roofs. And air-conditioners are being considered for all 750 public schools, which until now have been heated but rarely cooled.

“Cities adapt or they go away,” said Aaron N. Durnbaugh, deputy commissioner of Chicago’s Department of Environment. “Climate change is happening in both real and dramatic ways, but also in slow, pervasive ways. We can handle it, but we do need to acknowledge it. We are on a 50-year cycle, but we need to get going.”

Across America and in Congress, the very existence of climate change continues to be challenged — especially by conservatives. The skeptics are supported by constituents wary of science and concerned about the economic impacts of stronger regulation. Yet even as the debate rages on, city and state planners are beginning to prepare.

The precise consequences of the increase of man-made greenhouse gases in the atmosphere are hard to determine, but scientists are predicting significant sea level rise; more extreme weather events like storms, tornadoes and blizzards; and, of course, much more heat. New York City, which is doing its own adaptation planning, is worried about flooding from the rising ocean. The Navy has a task force on climate change that says it should be preparing to police the equivalent of an extra sea as the Arctic ice melts.

Some of these events will occur in the near-enough term that local governments are under pressure to act. Insurance companies are applying pressure in high-risk areas, essentially saying adapt or pay higher premiums — especially in urban and commercial areas.

The reinsurance giant Swiss Re, for example, has said that if the shore communities of four Gulf Coast states choose not to implement adaptation strategies, they could see annual climate-change related damages jump 65 percent a year to $23 billion by 2030.

“Society needs to reduce its vulnerability to climate risks, and as long as they remain manageable, they remain insurable, which is our interest as well,” said Mark D. Way, head of Swiss Re’s sustainable development for the Americas.

Melissa Stults, the climate director for ICLEI USA, an association of local governments, said that many of the administrations she was dealing with were following a strategy of “discreetly integrating preparedness into traditional planning efforts.”

Chicago is often called the Second City, but it is way out in front of most in terms of adaptation.

The effort began in 2006, under the mayor at the time, Richard M. Daley. He said he was inspired in part by the Kyoto international treaty for reducing carbon emissions, which took effect in 2005, and also by an aspiration to raise Chicago’s profile as an environmentally friendly town.

As a first step, the city wanted to model how global warming might play out locally. Foundations, eager to get local governments moving, put up some money.

“There was real assumption that Chicago could be a model for other places,” said Adele Simmons, president of Global Philanthropy Partnership, a nonprofit group based in Chicago that helped bring in $700,000 at the early stages.

Climatologists took into account a century’s worth of historical observations of daily temperatures and precipitation from 15 Chicago-area weather stations as well as the effect of Lake Michigan in moderating extreme heat and cold to come up with a range of possibilities based on a higher and lower range of worldwide carbon emissions.

The forecasts, while not out of line with global predictions, shocked city planners.

If world carbon emissions continued apace, the scientists said, Chicago would have summers like the Deep South, with as many as 72 days over 90 degrees before the end of the century. For most of the 20th century, the city averaged fewer than 15.

By 2070, Chicago could expect 35 percent more precipitation in winter and spring, but 20 percent less in summer and fall. By then, the conditions would have changed enough to make the area’s plant hardiness zone akin to Birmingham, Ala.

But what would that mean in real-life consequences? A private risk assessment firm was hired, and the resulting report read like an urban disaster film minus Godzilla.

The city could see heat-related deaths reaching 1,200 a year. The increasing occurrences of freezes and thaws (the root of potholes) would cause billions of dollars’ worth of deterioration to building facades, bridges and roads. Termites, never previously able to withstand Chicago’s winters, would start gorging on wooden frames.

Armed with the forecasts, the city prioritized which adaptations would save the most money and would be the most feasible in the light of tight budgets and public skepticism.

“We put each of the priorities through a lens of political, economic and technical,” said Suzanne Malec-McKenna, the commissioner of Chicago’s Department of Environment. “What is it, if you will, that will pass the laugh test?”

Among the ideas rejected, Ms. Malec-McKenna said, were plans to immediately shut down local coal-powered energy plants — too much cost for too little payback.

For actions the city felt were necessary but not affordable, it got help again from a local institution, the Civic Consulting Alliance, a nonprofit organization that builds pro bono teams of business experts. In this case, the alliance convinced consulting firms to donate $14 million worth of hours to projects like designing an electric car infrastructure and planning how to move the city toward zero waste.

Mr. Daley embraced the project. He convened 20 city departments in 2010 and told them to weigh their planning dollars against the changes experts were predicting. The department heads continued to meet quarterly, and members of Mayor Rahm Emanuel’s administration have said he is committed to moving the goals of the plan forward, albeit with an added emphasis on “projects that accelerate jobs and economic development.”

Much of Chicago’s adaptation work is about transforming paved spaces. “Cities are hard spaces that trap water and heat,” said Janet L. Attarian, a director of streetscapes at the city’s Department of Transportation. “Alleys and streets account for 25 percent of groundcover, and closer to 40 percent when parking lots are included.”

The city’s 13,000 concrete alleyways were originally built without drainage and are a nightmare every time it rains. Storm water pours off the hard surfaces and routinely floods basements and renders low-lying roads and underpasses unusable.

To make matters worse, many of the pipes that handle storm overflow also handle raw sewage. After a very heavy rain, if overflow pipes become congested, sewage backs up into basements or is released with the rainwater into the Chicago River — an emergency response that has attracted the scrutiny of the Environmental Protection Agency.

As the region warms, Chicago is expecting more frequent and extreme storms. In the last three years, the city has had two intense storms classified as 100-year events.

So the work planned for a six-point intersection on the South Side with flooding and other issues is a prototype. The sidewalk in front of the high school on Cermak Road has been widened to include planting areas that are lower than the street surface. This not only encourages more pedestrian traffic, but also provides shade and landscaping. These will be filled with drought-resistant plants like butterfly weed and spartina grasses that sponge up excess water and help filter pollutants like de-icing salts. In some places, unabsorbed water will seep into storage tanks beneath the streets so it can be used later for watering plants or in new decorative fountains in front of the high school.

The bike lanes and parking spaces being added along the street are covered with permeable pavers, a weave of pavement that allows 80 percent of rainwater to filter through it to the ground below. Already 150 alleyways have been remade in this way.

The light-reflecting pavement is Chicago’s own mix and includes recycled tires. Rubbery additives help the asphalt expand in heat without buckling and to contract without cracking.

The new streets bring new challenges, of course. The permeable pavers have to be specially cleaned or they eventually become clogged with silt and lose effectiveness.

Still, the new construction is no more expensive than traditional costs, Ms. Attarian said. Transforming one alleyway costs about $150,000. But now, she said, “We can put a fire hose on it full blast and the water seeps right in.”

Awareness of climate change has filled Chicago city planners with deep concern for the trees.

Not only are they beautiful, said Ms. Malec-McKenna, herself trained as a horticulturalist, but their shade also provides immediate relief to urban heat islands. Trees improve air quality by absorbing carbon dioxide, and their leaves can keep 20 percent of an average rain from hitting the pavement.

Chicago spends over $10 million a year planting roughly 2,200 trees. From 1991 to 2008, the city added so many that officials estimate tree cover increased to 17.6 percent from 11 percent. The goal is to exceed 23 percent this decade.

The problem is that for trees to reach their expected lifespan — up to 90 years — they have to be able to endure hotter conditions. Chicago has already changed from one growing zone to another in the last 30 years, and it expects to change several times again by 2070.

Knowing this, planners asked experts at the city’s botanical garden and Morton Arboretum to evaluate their planting list. They were told to remove six of the most common tree species.

Off came the ash trees that account for 17 percent of Chicago tree cover, or more than any other tree. Gone, too, are the enormous Norway maples, which provide the most amount of shade.

A warming climate will make them more susceptible to plagues like emerald ash disease. Already white oak, the state tree of Illinois, is on the decline and, like several species of conifer, is expected to be extinct from the region within decades.

So Chicago is turning to swamp white oaks and bald cypress. It is like the rest of adaptation strategy, Ms. Malec-McKenna explains: “A constant ongoing process to make sure we are as resilient as we can be in facing the future.”

By LESLIE KAUFMAN Published: May 22, 2011. A version of this article appeared in print on May 23, 2011, on page A1 of the New York edition with the headline: A City Prepares for a Warm Long-Term Forecast.